Hi Friends!
This October, I spent three weeks in Florida. I went down to the Atlantic Center for the Arts in New Smyrna Beach to take part in the first graphic novel artist residency ever! Svetlana Chmakova chose me to come down and make comics with her, Paul Pope, and Craig Thompson. Each of these master artists chose 8 people, and they came from all parts of the US and even from around the world! I love these people.
It's hard to begin explaining the massive wonder of it all.  SO much happened every single day. We made comics all day and all night. Pulling an all-nighter with Svetlana made me feel like I could have been making comics with Naoko Takeuchi herself (creator of Sailor Moon- my childhood hero). There was just… a presence in the studio that night, between all of us like-minded artists, singing Sailor Moon songs and eating candy and cookies.
Svetlana's goal for her group was to have us put together an anthology in just two weeks, so that we could have it in print by the end. It's called "Riding with Strangers".  The title was to be the theme of the stories. Each had to be at least 10 pages long. Those were the only parameters. Svetlana had her editor, JuYoun Lee, and the editor in chief of Yen Press come in to critique our stories at the rough draft stage!  This was an intense experience, but now I finally understand what editors do, and their importance. Thanks also to the editor of Dark Horse, Sierra Hahn. :)
There was always a fascinating discussion or demonstration taking place somewhere.When not tucked away in Svetlana's studio (marked with a  magical symbol of Nightschool on the door), I was often visiting Paul Pope's studio (nicknamed the Bull Pen).  Paul had a lot of guests come down to Florida to talk to his group, including Sam Hiti, Amanda Connor, Jimmy Palmiotti, Kostas Seremetis, and Jeff Newelt. He also hosted frequent film screenings and life drawing sessions.  With so many passionate people around, it was impossible for me to ever be alone-- my soul just wouldn't allow it!
The whole experience was like a comics summer camp. Ninety degree weather in October put my heart on a happy cloud from the moment I arrived. The buildings are beautiful and the campus is small and cozy, surrounded by tropical plants. I love tropical plants. Community meals were the best-- cooked up fresh every day by the ACA's very own Chef Tom. To sit around and talk about comics at 3 meals a day, 7 days a week, for 3 whole weeks… was amazing. And of course, I still have dreams of that white sand beach-- New Smyrna Beach. I'm sure the blissfulness of it all will never leave me. At the ACA, drawing became as fluid as life.  There was hardly a distinction between work and play- until it came down to "meet the deadline or I'm not going to Disney World"!
Anyone interested should keep their eyes on the ACA-- there may be more to come. With such a great response to this comics residency, they're already planning another for 2012. The ACA has shown the comics medium great respect by hosting this event, and I'm forever thankful to them-- for the memories and for an exciting future with the fantastic people I met! <3 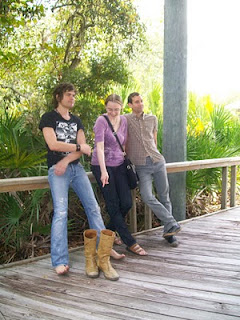 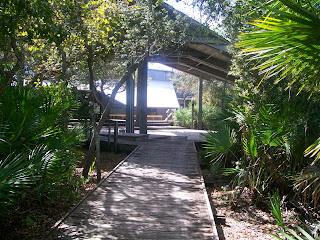 Posted by Salina Trevino at 9:10 PM No comments: