This was my entry for Anime Expo's Manga Lounge comic competition. The challenge was to create a Poke'mon comic of at least three panels. 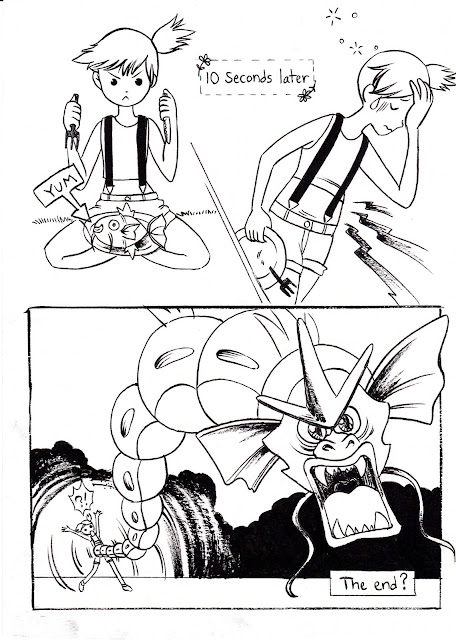 I must admit- I love the thrill of competing, and winning is fun and encouraging. <3 My entry won "Best Original" comic. They kept my comic in exchange for some nice prizes: two manga of my choice from their manga chest, a reusable Manga Lounge bag in a stylin' bright red, and a plushie of the Anime Expo male mascot, who has a nifty cape and top hat. A staff member also took a photo of me striking a victory pose with my comic in hand (on the only day of AX that I cosplayed) as Sailor Moon. If I ever find that photo... I will smile. :)

My favorite part of the prize was not part of the official prize package. It was made possible by perfect timing. I happened to be there just as the staff decided to give away a few old manga because they were in Spanish and weren't being read. So, I got to pick up a couple issues of Sailor Moon as published by Mixxzine. Now, I can study Naoko Takeuchi's artwork in large format, without the temptation of reading the story, since I don't know Spanish. Perfect!

Here are some details of my process:
When I found out about the contest, I brainstormed my idea before returning the next day to execute it. I knew I'd need some supplies from home and to print out some reference material. I packed supplies like the ones I'd use for a 24-hour-comic-- supplies that are quick, easy, and clean: a flexible fine tip pen, a pen to fill blacks, Pentel pocket brush, and a t-square, for ruling panel borders. Next time I'll also bring a white out pen and a large eraser. As for the idea, I knew I wanted to make a statement in a single page. Magikarp was one of the poke'mon I used to make fun of as a tween, so... t'was only natural.

I encourage anyone attending Anime Expo to go to the Manga Lounge. It's a lovely, quiet retreat from the often overcrowded convention. The contest has a different theme every year, so it will be fun to look forward to, if you are a fellow artist and anime fan. If the thrill of competing or the fun of comic-making isn't motivation enough... first prize is a set of shiny copic sketch markers. Woo!
Posted by Salina Trevino at 8:34 PM No comments: