The Minnesota Opera has begun it's new opera season, and it's first show is Verdi's "Nabucco"! The story, "...follows the plight of the Jews as they are conquered and exiled from their homeland by King Nebuchadnezzar (Nabucco)."--Minnesota Opera

I attended the final dress rehearsal with my fellow Black Hatters, to sketch the night away. Watching the opera and sketching at the same time is challenging. Add to that subtitles that must be read and, well... Unfortunately, I missed out on some plot points. But oh, the sights and sounds were simply marvelous! The costumes, sets, and singing are totally enjoyable even without an understanding of the Italian words. Such grand performances just fill my spirit right up with bright, burning goodness.

Below: Abigaille, older daughter of Nabucco

Above: Fenena, Younger daughter of Nabucco, and the High Priest of the Hebrews

I've had the honor of attending several of these dress rehearsals in the past, and I'm still working out the best way of capturing the magnificence of it all in my sketchbook. By nature, I am incredibly slow at everything, including sketching. This time, I tackled the job with my brush pen. First, I drew a rough impression with pencil. Then, I quickly attempted to give the characters more substance and form with ink. The result was far fewer sketches than usual, but all of them are way more complete looking than usual. This has been my first round of opera sketches that I didn't feel the need to work back into afterwards. Yay!
Posted by Salina Trevino at 5:45 PM No comments: 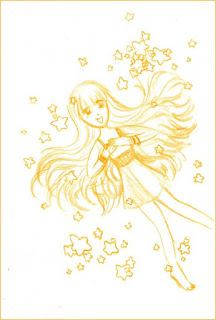 Good night, and sweet dreams!
Posted by Salina Trevino at 2:11 AM No comments:

Just a little mini comic I whipped up last week. It's pencil on vellum. My process of working normally  involves layers of tracing paper, but I decided to try vellum this time instead. I like how the graphite sticks to it! The idea to try vellum was inspired by Anna Bongiovanni's comic, Moon Baby.

This little mini is destined for some watercolor! I'm going to paint the flowers back to health; they'll change from a crispy yellow to a puffy pink. I was inspired by my mom's flower garden while visiting home. They were lovely and I hated the thought of them withering during the coming chilly season. I want to keep them beautiful forever with my paint!
Posted by Salina Trevino at 9:00 PM No comments: 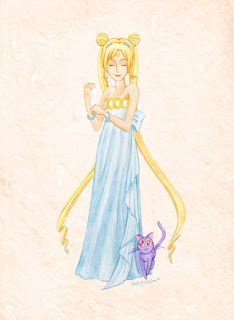 It always feels good to sit down with watercolors. Photoshop is magical for painting, but even with a cintiq, the feeling isn't quite as satisfying as having paint on paper. So~ here's Princess Serenity of Sailor Moon! Minus her poofy sleeves. I figured, the sleeves are detached from the dress, so she must have to put them on separately. So, as she's getting ready at the beginning of the day, or in the evening, winding down, she may look like this. Or hey- maybe some days she doesn't feel like wearing poofy sleeves! Here's the lovely model who was the inspiration for this piece- Saraqael.
Posted by Salina Trevino at 2:49 PM No comments: 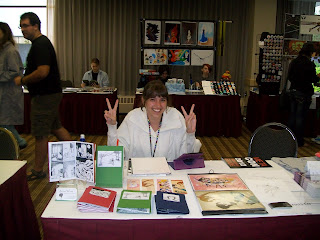 Yaaay! Last weekend I shared a table in Metacon's artist alley with my friend, Dennis Lo! I sold some new bookmarks and prints and met other cool artists, including my alley neighbors, Jen Riehm and Leandra Cota. To everyone who stopped by, thank you so much! The very best part of artist alley was talking with everyone! Thank you also to all of my friends who have done this before-- you gave me very good advice on how to be prepared and how to not be nervous. I know to never be without snacks, plenty of change, and yummy coffee to keep me chipper!
Posted by Salina Trevino at 2:50 PM No comments: