Anime Fusion was a brand new convention this year. It was a wee bit small, but a fun time nonetheless! I was happy to be table-mates again with my friend, Dennis Lo. We set up our comics and prints early each day, then sat and watched the flow of costumed con-goers drift by. Dennis would occasionally pick on them, for fun.

I got to do a couple of commissioned pencil drawings. It's such a pleasure to do commissions-- especially when traffic around the table is slow. I love that there's been so much room for interpretation in all of the commissions I've done! It's a special feeling knowing that a person doesn't just want a drawing of a character; they want your style and the spin that you can put on it!

A guy asked me to interpret Fluttershy as a human. She's a pony character from the new My Little Pony Series, called Friendship is Magic. It's very popular, because it's a fun and sweet show! The ponies are a cute anime-influenced style. This guy told me that he always gets a new drawing of Fluttershy done at each convention he goes to. I love the idea of collecting drawings from all sorts of artists with the same subject matter! How fun is that? It demonstrates a lot of love and devotion!

Conventions can feel long when you're sitting for hours with little sleep and little coffee, but afterward, you look back and it seems that it all just flew by. This artist alley was full of great talent and personalities. I was psyched to meet local artists Doua Jai Yang and Meng Wang, to once again see Leandra Cota, and to be neighbors with Kaycie Dunlap, who I fatefully met just under a week prior! Kismet, huh? Jen Reihm was there, too- sporting her Derpy Hooves costume and her perfect Fuu (Samurai Champloo). Thank you all for making the con colorful, fun, and inspiring! <3
Posted by Salina Trevino at 1:39 AM No comments: 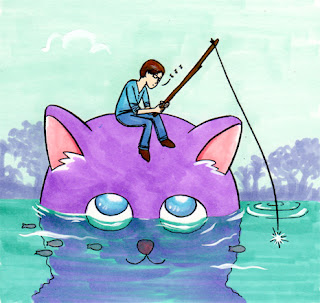 A birthday sketch for my friend, Sam Alden. He makes a lot of great comics. Go check them out! Do it now! Gingerland -- Dubblebaby
Posted by Salina Trevino at 12:04 AM No comments:

Young Raina and the Spirit 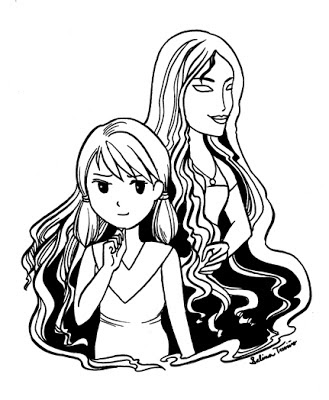 The spirit who goes by the name... "Mr Coffin"! A request by Katie,of her character (Mr Coffin) and mine (Raina). I don't believe Mr. Coffin has had a visual interpretation yet, so this is the first little piece of concept art! :) I hope you like it, Kitty!

For Anime Fusion, I whipped up some little Adventure Time stickers! I had the inked drawings sitting around in a sketchbook, just waiting to become something more. Flat colors are simple and fun to do, so it was a breeze. <3
Posted by Salina Trevino at 12:27 AM No comments: 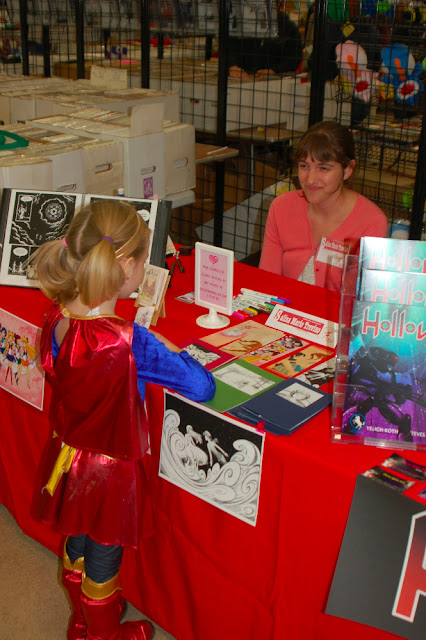 Proof! Proof that I attract adorable little girls! <3 I'm so happy that Ryan Carlson took this picture. That's his daughter I'm talking with. When she ran over to my table, Ryan interviewed me, since it was my first time exhibiting at FallCon. He wrote some kind words about me in his Fallcon article over on Wired.com. If you are reading this, sir, thank you so much! :)

Here's the article I wrote about FallCon 2012.
Posted by Salina Trevino at 1:30 PM No comments:

Email ThisBlogThis!Share to TwitterShare to FacebookShare to Pinterest
Labels: conventions


These are some sketches that I did up to represent commissions that I can offer while at conventions. They're 3.5 x 5 inches, and the paper is from a nice little Strathmore pad. I suppose it's kind of a strange size... I'll probably just chop that extra half inch from now on and make it 3 x 5.

I tried out some new things on these sketches. First, I used 2B pencil in conjunction with yellow mechanical pencil lead. I think I like it? Not sure yet. It's nice to work with, but in the end maybe it doesn't look as clean as straight up graphite. I did the inking with a pitt pen and pentel pocket brush, because I'm still debating whether it would be a good idea to bring my india ink and quill pen to artist alley. I wouldn't want to spill anything! And lastly, Strawberry Shortcake was colored with copics, prismacolor, and tria markers. Markers are such a new thing to me! I only recently acquired a decent amount of them, so I'm just now starting to color things. I'm a marker newbie!

Posted by Salina Trevino at 12:15 PM No comments: 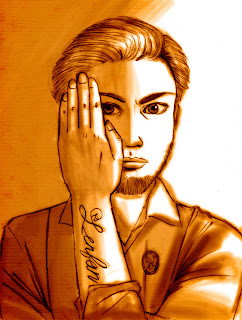 Today was my brother's birthday, so I made him a portrait gift.

During this piece, I mixed up my process in ways that I really enjoyed. I drew the figure and established the lighting in photoshop, as opposed to my usual way of working with tracing paper and/or  colored pencils. Working digitally is way cleaner and more organized. To maintain a hand-drawn feeling, I printed it out and traced over it using 2B pencil on vellum. Lately, I've been loving vellum for doing my tight pencils. Lastly, I scanned it back into photoshop and added the color.

Posted by Salina Trevino at 9:29 PM No comments:

Email ThisBlogThis!Share to TwitterShare to FacebookShare to Pinterest
Labels: illustration 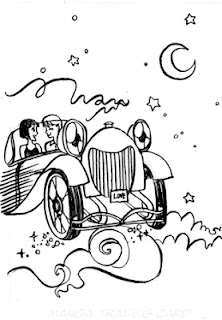 I just learned about "Inktober"-- a daily ink drawing challenge. I'm a a little late getting started, but I figured, why not give it a shot?

Posted by Salina Trevino at 10:35 PM No comments:

It's done! I finished this for Fallcon and sold it as a $1 mini, tied with gold organza ribbon. In person, it's a real cutie! If you're interested in the process, you can see the pencils here. I decided to color it in photoshop, after being inspired by this great tutorial on mixing colors. It blew my mind a little... You can read it here! :)

Posted by Salina Trevino at 8:20 PM No comments:

This weekend, I set up shop at FallCon! Let me just start off by saying-- I think it's really difficult to portray my excitement through text. I'd rather let my face, voice, and bounciness tell you the story of the convention. But alas... I hope I can give you an idea here of how utterly delightful this experience was. 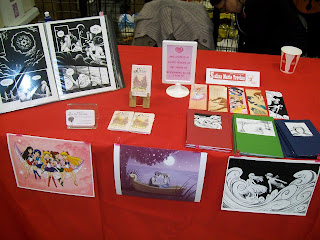 This was my display! My Sailor Moon picture out in front attracted many a little girl to my table. I didn't know kids these days were even watching Sailor Moon! One, maybe nine years old, bragged to me about all the issues of the manga she owns, and began quoting all of the attack names. Another, I gave some free art to, because she was only FIVE or something, LOVED Sailor Moon, and her parents weren't going to buy her anything. I made her day, and that gave me something more valuable than money.

Normally, I cosplay at conventions. However, I find that it feels pretty weird sitting behind a table in a costume. You know? Putting on a costume makes you want to run around and explore and be that character for a while. It's magical! But in artist alley, I want to be 100% me. So, I realized, this is the way to enjoy cosplay while in artist alley-- by celebrating other people!

Lately, I've been feeling that I ought to begin accepting commissions. I took it as a good omen when a couple people requested commissions of me and I wasn't even advertising them! They were so much fun to do. And I'm so happy that I got to make other people very happy with custom artwork. What a "wow" feeling. 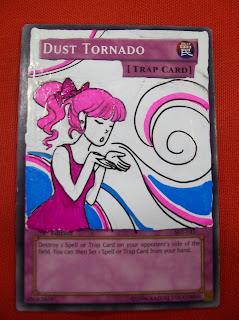 The first request was for a custom Yu-Gi-Oh card. I got to pick one of his existing cards, white out the image, and draw in my own. He made it clear that I could draw absolutely anything I wanted, and suggested I could do one of my original characters! How awesome is that, right? He even left me his paint markers, since I had no suitable supplies with me.  I chose a card called "dust tornado" and drew my character Autumn, blowing a great big swirl of wind from her cupped hands. The second request was from a lady who wanted me to draw a portrait of her lovely obitsu doll. So pretty!

What a day. The time flew by. I wish there were more conventions like this. Not only is it fun, it's free for artists. That meant no worries about breaking even! Nothing but awesome. Thanks for tuning in, guys! My next convention is Anime Fusion: Oct' 19th-21st!


P.S.--- A word of thanks to my amazing table-mates-- writer Christa Yelich-Koth and artist Conrad Teves. They enriched my experience with lovely talk of art and stories of their collaboration. Also, Conrad lent me his white-out pen, without which I could NOT have pulled off that Yu-Gi-Oh card!! Thank you!
Posted by Salina Trevino at 12:23 AM 3 comments:

Email ThisBlogThis!Share to TwitterShare to FacebookShare to Pinterest
Labels: conventions 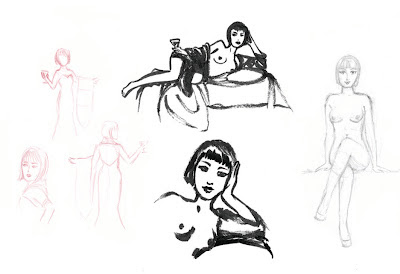 Life drawings I made during last month's Dr Sketchy's. The colored pencil drawings on the left are one-minute sketches. The center two were drawn during a 15 minute pose. The rightmost drawing, I had a whole half hour to do. I never know quite what to do with all that time-- so I normally just draw the pose twice. So much to learn! Dr Sketchy's is always my favorite life drawing session. Pretty ladies,  with costumes and without, are just so fun to draw! This model's name is Electro-Cute. During the one-minute poses, she wore a gorgeous black sequin dress, had a long fur draped over her, and wore a stack of ten or so pearl necklaces! (Perhaps you can see the necklaces real lightly in my sketches? They're massed together into a scarf-like clump.) The thing about Dr Sketchy's is that there's never enough time to draw the costume before the model takes it off. Which is good, because it keeps you focused on drawing the figure!

Posted by Salina Trevino at 10:21 PM No comments: