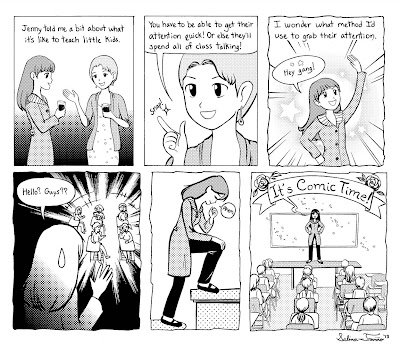 At the beginning of the year, I thought I was going to be teaching an after school comic art class to middle-schoolers. As it turned out, not enough students enrolled, so it was cancelled. But as I was preparing for the class, I was asking around for advice from all my friends. Jenny raised a good point about the disciplinary aspect of teaching, and it made my imagination fire up- and thus, this comic was born!

The top tier of panels were inked with a Hunt 108 and fine Pitt pen. The bottom tier was inked with a sable brush. The reason for the variation... well, I thought it was only going to be three panels at first, and when I decided to do the second tier I had a big itch to use the brush. That's all! It's interesting seeing how the tones interact with the different line weights.

The last panel was a challenge. After trying to draw a crowded classroom with nothing but classic perspective and elbow grease.... I fell back on google sketchup. What a lifesaver it is! Besides, why not use every tool available? Sketchup will help me learn to see and understand three-dimensional environments. All in good time.

This is the first comic that I toned using Deleter ComicWorks. Oh, how I love it! I find it to be a lot faster than using Photoshop to tone. Panel four went through two other variations before arriving at this tonal state. I'm happy with how the contrast creates a feeling of shock and stress. If I continue doing little strip exercises, I plan to use ComicWorks, to learn more tone techniques!
Posted by Salina Trevino at 11:56 PM