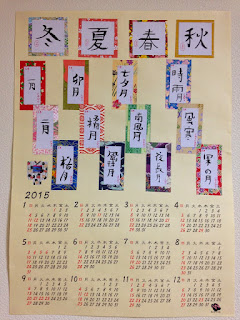 Today, I went to Shodo (Japanese calligraphy) class for the first time. It was a lucky day to go, because Sagara sensei had us make calendars!

Apparently there are a ton of different ways to write the months of the year and the four seasons. I was given these handouts, from which I could choose the kanji I liked best.

There are nine different ways to write each month. These sheets are read from right to left, so January begins on the right and spans three columns. Then, February begins in the fourth box from the right and so on.

I asked, "What do they mean? Do they evoke different images?" I didn't get a translation for each and every variation, but as you can see in the photos, I noted a few of them. Some of the kanji for the winter months meant "Spring," so I didn't choose those ones for my calendar. Sagara sensei said that those ones are better for people living on Honshu, the mainland, further south than us.

Here are the translations (as I understood them) for the kanji I chose:

January : first month
February : second month
March : chilly
April : field of mustard (canola flowers)なのはな
May : orange blossoms たちばな
June : wait wind (waiting for the wind)
July : star festival おれひめ?
August : south wind
September : a long night
October : a cold autumn lane
November : cold wind
December : the last month
On my calendar, I placed kanji for the seasons above the months. There are also many different ways to write the seasons. The kanji on the left sides of the photos below are very ancient. The kanji on the right sides are newer. I chose to use the most common kanji for the seasons, so that I can learn to recognize them. The most common kanji for each season is the one in each upper right corner.


After I chose my kanji and drew them, I picked out which papers I wanted to frame them in and set out my pattern. 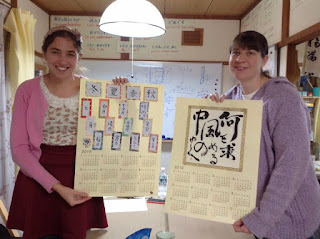 This would be an easy project to do at home, for anyone interested. I used a simple brush pen for the calligraphy. The patterned paper is from Daiso, I believe (a Japanese dollar store). Daiso has a bunch of locations on the west coast in the US, too. So, that's all... Thanks for reading! c:
Posted by Salina Trevino at 9:01 AM